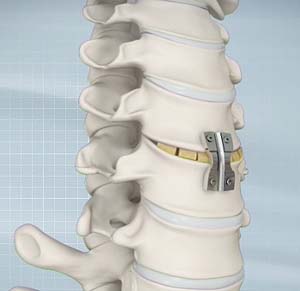 The vertebrae of the backbone are cushioned by intervertebral disks that act as shock absorbers and allow frictionless movement of your back. It is made up of a soft gel-like center called the nucleus pulposus that is surrounded by a tough outer ring of annulus fibrosus. A herniated disk is a condition in which the nucleus pulposus bulges out through the damaged or broken annulus fibrosus. This puts pressure on the neural structures, such as nerve roots and/or the spinal cord. Besides, bony outgrowths, also known as bone spurs or bone osteophytes, are formed due to the accumulation of calcium in the spine joints. The pressure induced by a herniated disk or bone spur on nerve roots, ligaments or the spinal cord may cause pain in the neck and/or arms, numbness or weakness in the arms, forearms or fingers, and lack of coordination.
As most nerves to the body (e.g., arms, chest, abdomen, and legs) pass through the neck region from the brain, pressure on the spinal cord in the neck region (cervical spine) can be very problematic.

What is Anterior Cervical Discectomy and Fusion?

Anterior cervical discectomy with fusion is an operative procedure to relieve compression or pressure on nerve roots and/or the spinal cord due to a herniated disk or bone spur in the neck. The vertebra is approached from the from (anterior) of your neck.

Anterior cervical discectomy with fusion is recommended only after non-surgical treatment approaches fail. Before recommending surgery, your surgeon considers several factors such as your health condition, age, lifestyle and anticipated level of activity following surgery.

A specific postoperative recovery/exercise plan will be offered by your physician to help you return to normal activity at the earliest possible. The duration of hospital stay depends on this treatment plan. You will be able to wake up and walk by the end of the first day after the surgery and resume your work within 3-6 weeks, depending on your body’s healing status and the type of work/activity that you plan to resume.

Risks or Complications of Anterior Cervical Discectomy and Fusion

In addition to the anesthetic complications, spinal surgery is associated with some potential risks such as infection, blood loss, blood clots, nerve damage, and bowel and bladder problems. Failure to fuse the vertebral bones with the bone graft (fusion failure) is an important complication of spinal fusion, which usually requires additional surgery.

32 year old female comes with right arm pain that radiates all the way down to her fingers. We tried therapy, injections, oral pain medicine, and time. Because of the pain, a MRI showed a herniated disc in her neck on the right side (arrow). The left image is a side view and the right images is a cross section view.

You will need the Adobe Reader to view and print these documents.