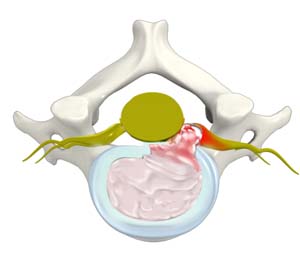 The cervical region consists of 7 cervical vertebrae (C1-C7), with intervertebral disks between each vertebra that function to provide flexibility to the backbone. Intervertebral disks are soft, compressible structures consisting of a hard-outer ring called the annulus and a gel-like center called the nucleus.

What is Cervical Disk Herniation?

Herniation of a disk is an anomalous spine condition characterized by the bulging of the inner contents of the intervertebral disk due to cracks in its outer wall. A herniated disk is commonly seen in the cervical or neck region and is called cervical herniated disk (CHD). This condition is frequently reported in people between 30-40 years of age as well as elderly people.

The usual symptoms associated with a cervical herniated disk are pain and numbness in the neck, shoulders, chest, arms, and hands, followed by weakness in the associated region.

The treatment of CHD begins with conservative (non-surgical) methods, as reports show that around 90% of patients may return to normal activity by employing these interventions for at least 6 weeks.

Surgery is recommended if you do not respond to non-surgical measures. Moreover, numerous other factors such as your age, other underlying medical conditions, previous neck surgeries and duration of suffering are considered before deciding on surgery.