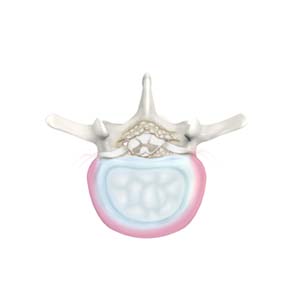 What is Degenerative Disk Disease?

Degenerative disk disease (DDD) refers to the gradual deterioration of the intervertebral disks between the vertebrae. DDD is a misnomer as it is not actually a disease but a condition that affects the strength, resilience and structural integrity of the intervertebral disks due to advancing age, trauma, injury, repetitive movement, improper posture or poor body mechanics. DDD is commonly seen in individuals over 50 years of age. Most of them are usually not aware of their condition until they are examined for some other related health condition.

As we age, the rate at which the old, worn out cells are replaced is gradually reduced, resulting in the degenerative changes in the disks. This can also be accelerated by injury or trauma.

These structural changes can cause a sequence of other changes, resulting in nerve compression and pain due to reduction in the disk height, and presence of bone spurs or bony overgrowths (osteophytes). Other conditions such as spinal stenosis and osteoarthritis (spondylosis) can also affect the intervertebral joints and spinal stability.

Every patient is different, and it is important to realize that not everyone develops symptoms because of degenerative disk disease. When the condition becomes painful or symptomatic, it can cause several different symptoms due to the compression of the nerve roots. Depending on the location of the degenerative disk, it could cause back pain, radiating leg pain, neck pain and radiating arm pain.

As the disks between the intervertebral bodies start to degenerate, the entire lumbar spine loses flexibility, resulting in back pain and stiffness.

The diagnosis of degenerative disk disease comprises of complete medical history and physical examination. The examination of the back for flexibility, range of motion and the presence of certain signs that suggest nerve root injury help detect the degenerative changes. This is done by testing your muscle strength and your reflexes to make sure that they are still functioning normally.

A series of X-rays may also be performed. If degenerative disk disease is present, the X-rays will often show a narrowing of the spaces between the vertebral bodies, which indicates that the disk has become very thin or has collapsed. Bone spurs formed around the edges of the vertebral bodies and facet joints in the spine can also be viewed on an X-ray. As a result, the space available for the nerve roots begins to shrink. The nerve roots exit the spinal canal through a bony tunnel called the neural foramen, and it is at this point, that the nerve roots are especially vulnerable to compression.

In most cases, an MRI or CT scan may be ordered to evaluate the degenerative changes, determine disk herniation and nerve root compression. A CT scan can show the amount of space available for the nerve roots, as well as the space within the neural foramina and spinal canal.

Both surgical and non-surgical treatment options are available for the management of degenerative conditions. The choice of treatment depends on various factors such as your age and severity of the disease.

Conservative treatment such as medication, rest, exercise and physical therapy are usually recommended if your diagnosis has not shown any evidence of nerve root compression or muscle weakness.

Surgery is suggested only after conservative treatment options fail to adequately relieve your symptoms of pain, numbness, and weakness over a significant period. Decompression of the spinal cord along with a discectomy and fusion will be performed to remove the affected disk and fuse the adjoining vertebrae to stabilize the spine.

42 year old man with unrelenting low back pain. He has difficulty sitting and feels better laying down. He had done therapy for 6 years and injections without relief. He had a previous discectomy for a disc herniation 15 years ago. Xray shows significant disc degeneration. The height of the disc (arrow) is significantly lower than a normal disc (star).